Used car bubble could be deflating, but no crash is expected

Cox Automotive has marginally downgraded and adjusted the seasonality in its forecast for the used car market, citing dwindling supplies of stock and declining consumer spending habits as contributing factors to decreasing market performance.

Revised forecasts in the latest issue of Cox Automotive’s AutoFocus magazine indicate that the used car bubble could be deflating.

Philip Nothard, Insight and Strategy Director at Cox Automotive, references a recent decline in used vehicle trade values and the easing of wholesale demand as early signs that the halcyon days of the past few months may be coming to an end. 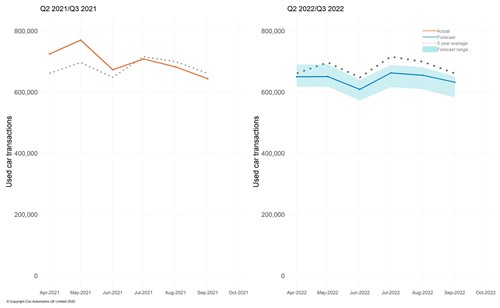 The company also expects the baseline scenario for the full year to end on 7.4 million used car transactions, a -1.6% decrease year-on-year, and a -1.3% downgrade on its previous forecast.

Early signs that the used car market was changing were observed in Q1 of this year, leading Cox Automotive to adjust its used car forecasts. Factors including the ongoing cost-of-living crisis and rising inflation, the lowest reading since June 2008 from the UK’s consumer confidence index, the recent decline in used vehicle trade values, and the easing of wholesale demand all indicate that the used sector performance could be on the turn. As a result, Cox Automotive anticipates that the market will experience a further decline in values throughout the second quarter and possibly into Q3. 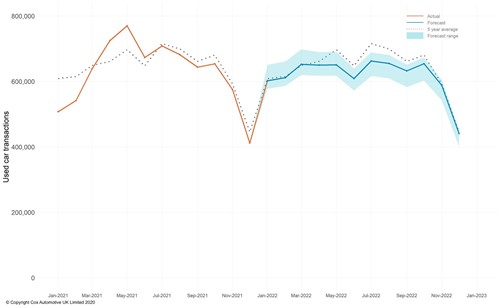 Dealers have been relying on their used-car programmes to support their businesses when new car product has not been available. As a result, the used market remains a crucial area of growth and investment for many, whether from current players or new disruptive entrants. However, the used car market has historically relied on the new car market, but with continual pressures on new car supply, this could impact the used vehicle parc.

Nothard added: “The result could be a supply-driven used car market that sees prices maintain their current record levels or increase further. But for the time being, the market is coping extremely well and has demonstrated resilience to these external pressures, with 7.5 million used car transactions in 2021. Although this may not have necessarily resulted from strong retail demand, it is positive compared to 2020.”

Despite all the challenges facing dealers today, consumer demand still exists, albeit rapidly falling in recent months.  The latest Consumer Confidence Index of -38 was recently published by GfK, indicating the lowest since June 2008. The effect that reduced consumer confidence will have on the market remains unknown. While retailers are seeing increased stock turn and a desire from consumers who are not prepared to wait the lengthy lead times to buy a used vehicle instead, Cox Automotive warns this could be about to change.

The much-publicised increase in the cost of living, combined with the seasonal occasions, such as the Easter holidays, could see consumer demand ease from April and the summer months. Used car values are already starting to be impacted by reduced demand. Indeed, Cox Automotive reports that the acceleration of trade values for most age bandings has begun to stabilise and, in some cases, decrease, as illustrated in the chart below. 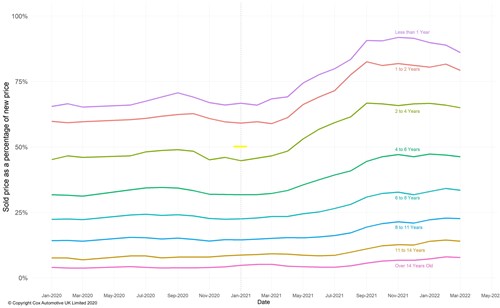 Due to several headwinds facing the new vehicle market, Cox Automotive anticipates that the sub-one and one-to-two-year brackets will be most affected immediately. But with the recent decline in used vehicle trade values and the easing of wholesale demand, the company anticipates the market will see a further decline in values throughout the second quarter and possibly into Q3.

Nothard concluded: “Used vehicle values are still at a significant high point compared to the pre-pandemic market, and the effects will be different across all makes, models, and ages. For example, there is still high demand in the sub £5,000 and £10,000 sectors and higher-priced vehicles, while the mid-market is feeling the most pressure as mass-market buyers tighten their belts to compensate for the rising cost of living.

“Consequently, it has never been more important for retailers to analyse their pricing position, review stock profiles, and regularly monitor the retail and wholesale markets. But, as the old saying goes, the devil is in the detail.”