Retailers will have to adapt to a ‘new normal,’ focusing on margin retention

Cox Automotive has strongly indicated that the automotive sector will not return to pre-Covid norms at any point throughout the next 12 months. The ongoing raw material and semiconductor shortages affecting the new car market and filtering down to the used car market are unlikely to ease until later this year. Therefore, while demand is high and supply remains low, retailers will have to adapt to a ‘new normal,’ focusing on margin retention and profit. However, used car values are unlikely to rise at the rate experienced in 2021 or fall at the rate observed in pre-pandemic times.

According to Philip Nothard, Insight and Strategy Director at Cox Automotive, retailers continue to report healthy trading results by maximising unit profitability over volume and benefiting from stable consumer demand for used vehicles. Wholesale demand continues to reflect the healthy retail sector, with an appetite for quality used vehicles, while days to sell and stocking levels remain low. As such, retailers are less likely to offer discounts because demand looks likely to outstrip supply of vehicles for some time. 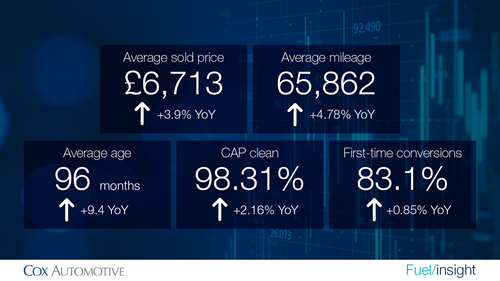 Increases in the month-on-month key wholesale market indicators were observed throughout much of 2021. However, it was not until October where slight stabilisation of the wholesale market was experienced, with marginal falls recorded in the year’s closing months.

The impact of the pandemic led to supply constraints for supply chains and tier-one to four suppliers, creating increased demand and shortage of used vehicles. Unsurprisingly, compared to 2020 and the last pre-pandemic year of 2019, used cars at Manheim auctions experienced increases in the average age, mileage, sold price, CAP Clean and first-time conversion rates throughout 2021.

The key performance throughout 2021 was not only the demand for quality retail vehicles, but the value and percentage of CAP Clean they achieved.  The full year resulted in a CAP Clean performance of 98.31%, an increase of 2.16% compared to 2020, and a 3.9% increase on 2019’s result.

Philip Nothard, Insight and Strategy Director at Cox Automotive, said: “Considering the increases applied to the values throughout the year, being able to retail close to a 100% result is unprecedented.”

Used car values continued to rise last year, with the average sale price at auction increasing by 3.9% or £255 to £6,731 compared to the previous year. Nothard said: “A small increase in the overall average price paid for a used car in 2021 might not alarm many, but wholesalers and retailers are having to work harder to sell older, higher mileage cars. Both traders and consumers know that due to the lack of supply, they’re having to pay higher prices for cars that are less desirable because they’re older.”

Nothard added: “Despite the very slight increase in sales of 1.0% in 2021, the results show just how severely the industry was affected by semiconductor and other raw material shortages. In addition, we need to keep in mind that despite the similar sales figures from 2020, manufacturers were forced to shut down factories for substantial periods in 2020 when the pandemic first hit.”

In November 2021, Cox Automotive published its new car sales figures forecast in its annual Insight Report. Within it, the company gave its best, mid, and worst-case scenarios for new car registrations that year. As predicted, the most likely mid-case scenario proved to be the most reliable, at 1,631,746 vehicles. This represented a +/-0.9% accuracy forecast difference to the actual data published by the SMMT.

Writing about the full-year performance in the latest AutoFocus, Nothard said: “Two of the major trends – electrification and semiconductor shortages – are likely to continue to impact the new car market in the UK in the short to medium-term. In addition, the ongoing impact of COVID-19, uncertainty surrounding Brexit, and continued supply shortages looms large, and it may take longer than anticipated for the market to recover from this as quickly as hoped. But in the short term, we anticipate a continuation of the current market conditions, with some uplift in supply helping to drive sales as we progress through Q1 2022.”

Nothard concluded: “The automotive sector across Europe continues to suffer the consequences of restrictions and lockdowns, along with uncertainty caused by new COVID-19 variants, and the continuation of supply constraints caused by the raw material shortages. In addition, the UK and several European markets face consumer confidence stalling as motorists battle with rising energy costs and inflationary pressures.”