UK dealerships should brace themselves for another year of used vehicle demand outstripping supply as stock remains hot property while the new market continues to recover. That’s the view of Cox Automotive published in its latest quarterly AutoFocus publication, which reveals a projected increase in used car sales compared to last year in its most-likely market scenario. However, while this projection is an increase on 2021, it is still down on pre-pandemic averages. 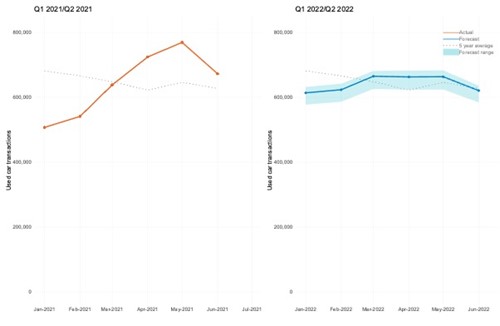 Manheim auction data for January 2021 shows an evident change in the profile of vehicles entering the remarketing sector, with the average vehicle age at 100.9 months, an increase from 89 months recorded at the same time last year. Average mileage also increased from 64,996 to 70,162. However, despite an older vehicle profile, units are still selling at high numbers due to stock shortages, with the average selling price increasing by £1,917 from last year’s £6,133. CAP Clean conversions also increased from 93.39% to 98.26%, while first-time conversions rose from 77.6% to 83.3%.

Philip Nothard, Insight and Strategy Director at Cox Automotive, commented that although these numbers continue to increase, key wholesale indicators are now starting to fall more in line with pre-pandemic levels compared to the same period last year.

He explained: “Consideration must be given here to the months leading into the pandemic in the UK before the shutdowns towards the end of March 2020. The used car market was performing ahead of expectations, with the first two months of 2020 considerably ahead of previous years. In January 2021, although the government had lifted restrictions, the sector had established click and collect programmes which meant they could enjoy some vehicle sales, but consumers remained cautious.  Therefore, sales remained relatively low compared to projections.

“With this in mind, although sentiment has started more slowly than expected in 2022, key wholesale indicators are starting to fall more in line with pre-pandemic levels than the same period last year. However, the data clearly demonstrates that buyers have to get used to a significantly older profile of vehicle, with stock still at a premium.”

Philip Nothard believes that new car production issues are expected to remain until 2023, along with the familiar situation the industry has become accustomed to since the reopening of showrooms in the summer of 2020. The situation is a continuation of fewer used vehicles, which leads to more wholesale competition, driving up values and increasing retail prices.

As buyers struggled to source new cars during the pandemic, ‘nearly new’ vehicles became hot property and currently remain the most in-demand of all used car age groups. These vehicles are aged between zero and two years old and are usually sourced from leasing and rental companies, typically holding onto stock that would usually enter the wholesale market.

Nothard said: “It’s increasingly likely that we will see a continuation of many of the market dynamics we saw in 2021. Although there are signs of new vehicle supply returning, it is currently very dependent on those manufacturers who have managed to secure the necessary materials to build vehicles and therefore keep production lines running. And even then, those manufacturers can only fulfil quotas on select models and derivatives.

“Manufacturers are slowly getting to grips with their production issues, but the situation is unlikely to improve as the year progresses. The new market recovery will be a prolonged and gradual process. As a result, we will not see a flood of stock enter the market, but rather a gradual increase as the backlog of orders for new vehicles gets cleared, in turn generating much-needed stock for the used market.”

What will happen to used car values?

After months of unprecedented levels of rapid climbing values for used cars, Nothard believes a ceiling may have already been hit. 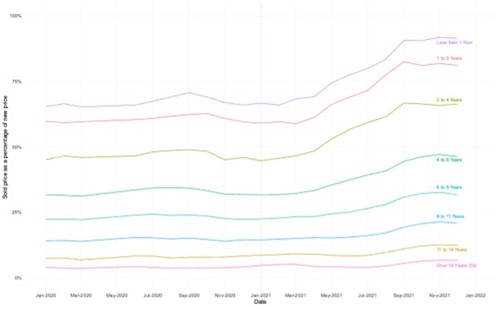 The above chart illustrates the strength of the market, which has taken place in the zero-to-one and one-to-two-year age brackets. These vehicles, supplied mainly by the leasing and contract hire sector, have seen the biggest demand, coupled with reduced supply, as companies extend contracts rather than renewing their fleets. This effectively starves the wholesale market of stock, driving prices upwards. Over time, as supply issues are resolved, Nothard expects values to decrease. However, he warns that this will be a gradual process and much slower rate than many will hope for.

Nothard concluded: “The concern is that values will start to decrease at a time when profitability per unit is more vital than ever, but current supply and demand levels won’t allow that to happen. As long as new car supply issues remain and used cars continue to be dripped into the market rather than released like a tsunami, then natural market dynamics dictate that values will remain at current levels for some time.”

We reveal the answers to these questions and much more in the new issue of AutoFocus.