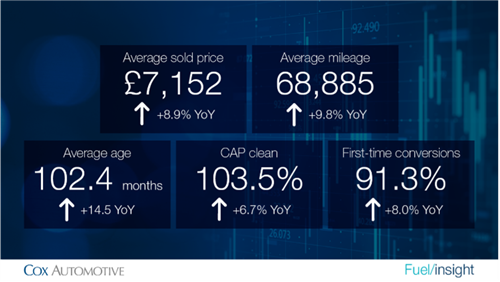 The worst September plate change since 1998 has laid bare the challenges in the new car market, driving up demand and prices in the used vehicle sector. That's the key finding from Cox Automotive's latest market tracker, which shows an increase in average sold prices, mileage, age and CAP clean performance.

Manheim results for September show the supply and demand imbalance continuing to drive up key wholesale indicators, alongside the well-publicised increased trade values. As a result, the average first-time conversion achieved more than 90%, increasing by 8.05% on the same period in 2020, during a pent-up demand period. Meanwhile, key wholesale indicators for used car mileage and age remain above normal seasonality as retailers maximise opportunities and review stock profiles.

The ongoing new car market disruption continues to impact the used car market dynamics at auction. Used car values continued to rise in September across Manheim's auctions, with the average sale price increasing by 9.8% or £639 month-on-month, to £7,152. Supply and demand continue to drive up the wholesale key indicators, as desirable younger, low mileage, and better condition wholesale vehicles continued to be lacking in supply.

As a result, CAP clean values increased again, achieving over 103%, while age points and first-time conversions achieved the highest ever seen at Manheim, at over 91%. The average age of cars sold increased by 0.39% to 102.4 months. The only marginal fall recorded was in the average mileage of cars sold, decreasing by -1.13% and down by 790 miles to 68,885 miles. However, September's average mileage figure represented an increase of 9.8% year on year.

Philip Nothard, Strategy and Insight Director at Cox Automotive, said: "The results are staggering when we remember back to the 1st of June 2020, when the first lockdown had ended, and dealers were allowed to open showrooms again to enjoy a brief period of pent-up activity. Who would've known we would have seen the disappointing new car sales figures and the reduced supply in used cars - the following year, due to the lack of supply? The expression: 'hindsight is a wonderful thing', couldn't be more accurate. In general, stability in the used car market remains constant, whereas the new market is severely limited by supply."

The supply shortages are clearly reflected in the new car market, where models such as Ford's Fiesta and Focus and Vauxhall's Corsa and Astra consistently make it within the top 5 best-selling models. In addition, other cars such as the MINI hatchback, Nissan Qashqai and BMW 3 Series are also models that usually appear within the SMMT's top 10 best-selling new cars. However, the SMMT reported that its top 10 best-selling cars in September 2021 included a mix of new models that don't usually appear in the rankings. These include models such as the Toyota Yaris, Toyota Aygo and Kia Niro.

Nothard added: "What we witnessed in September is a disruption of the top 10 best-selling new cars. Some of the new cars listed in the rankings aren't as popular as the makes and models we normally see every month, which is also reflected in the year-to-date ranking. This is because waiting lists for new cars are so lengthy that many consumers are putting off their first and second preferences and instead purchasing vehicles based on the current availability of new product."

According to data from the Society of Motor Manufacturers and Traders (SMMT), 246,737 new cars were sold in the UK, a -34.4% drop on the results from September 2020 – when the effects of the pandemic were also affecting the new car industry. The sales figures also represent a -44.7% decline on the pre-pandemic ten-year average for September. However, year-on-year figures saw a -25% decline, a fall of -37% behind the 2000-2019 average and -28.1% below pre-pandemic levels.

Nothard added: "September 2021 coincided with the new car registration plate two-digit age identifier, changing from '21 to '71. Last month also represents the second most important month of the year for car manufacturers and dealers looking to achieve their targets not just for September but 2021 in general. September's results are the lowest since September 1998, a year before the current bi-annual two-plate system was introduced.

"For several months, I've been urging caution as semiconductor shortages continue to into at least H2 2022. Part of the reason why the number of new cars was so much lower in September 2021 was because of extended lead times from many manufacturers. And while not all are affected in this way because of existing stock, most manufacturers are prioritising which of their markets will generate the maximum revenue and return on investment."

In contrast to the overall results, there was better news from the SMMT's data in the number of battery electric vehicles (BEV) sold last month. The number of new BEVs increased by 32,721, the best-ever monthly performance for the fuel type. However, this figure was just 5,000 short of the total number of BEVs registered in the whole of 2019. The share in plug-in hybrids (PHEV) also grew to 6.5%, meaning that one in five new cars registered in September was zero-emissions capable and hybrid electric vehicles (HEVs) grew from 8.0% in 2020 to 11.6%.

Nothard added: "Most people will have noticed the increased number of electric cars on their roads. We have a climate target to achieve, the upcoming ban of the sale of wholly petrol and diesel cars in nine years, the TCA delays caused by Brexit, and the logistics sector's resource challenges. The recent fuel crisis we've seen is yet another reason why electric cars are now appearing to be more convenient – increasing their demand and lead times as a result."

Nothard also remarked on the pre-registration activity, which is said to be assisting dealers with the new car supply issue and the demand for used vehicles. He added: "I am aware of reports of low volumes of pre-registration activity, which is brand-specific and on cars that are not that desirable to the retail buyer. This practice is well-known and is a way for both manufacturers and dealers to benefit individually. However, the practice of pre-registering new cars at this time offers an increase in registration volumes and gives the retailer additional stock that can be retailed, at a time where it's most needed in the current supply and demand imbalance."